The Latham & Watkins Award in Technology and Law scholarship seeks to train a new generation of technology lawyers who are not only equipped to analyze the most complex technology law and policy issues, but also students who have mastered the technical understandings of the discipline. The student selected for this award must demonstrate a passion for technology and cybersecurity law and an interest in the interdisciplinary aspects of the subject.

Law students selected for the program will be obligated to enroll in technical cyber-security courses at NYU Tandon School of Engineering that are consistent with their academic program. They will also participate in weekly cohort meetings with students focusing on cybersecurity from other NYU schools and engage in a substantial research project or construction of a technical tool. The programs are designed so that lawyers may better understand the technological aspects of information security, and the privacy and civil liberties concerns that surround the field.

Students will enter the program in the fall of each academic year and will earn a $10,000 scholarship towards tuition for each year that they are a part of the program (students will be admitted for one year, potentially renewable for one additional year).

Application Requirements: Applications for 2020-21 are now closed. Please keep an eye out for information on future opportunities. 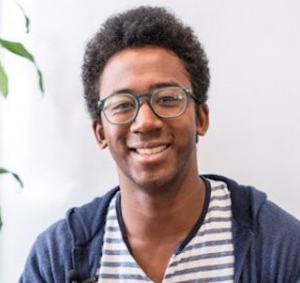 Kevin Kuate Fodouop is a second year student at the New York University School of Law. His prior background is in computer science and statistics, and before law school he worked in the tech sector as a startup Product Manager and Head of Growth. He is interested in the intersection between intellectual property, cybersecurity, antitrust, and international law, and in the comparative analysis of models of technology governance promoted by China, Europe, and the US. He notably plans on researching the impact of Artificial Intelligence on IP legal and policy frameworks.

David Stein is a 2L interested in how differing international regulatory standards affect the development of technology and the internet. Before law school, David spent a decade working in the tech industry, including roles conducting privacy and AI research and leading cybersecurity at Alphabet’s Sidewalk Labs, serving as the director of engineering at Braze and building products and analytics systems at Dropbox, where he was an early engineer. David studied Computer Science at MIT, where his research focused on distributed robotics and satellite design. David spent the past summer developing software that uses machine learning to augment the legal analysis of privacy policies.

Cassi Carley is a 2L interested in privacy and cybercrime, especially the interface between corporate responsibility and government investigations as well as general technology innovation, regulation, and policy. Prior to law school, Cassi received a Ph.D. in Computer Science from Duke University. Her research focused on computer vision and AI, and her thesis included an application for detecting cell phone interaction to protect sensitive user data captured in surveillance settings. Additionally, Cassi has explored the ethics of emerging technology as a fellow at the Duke Center on Law & Technology. She is the co-founder of Ethical Tech (www.ethical-tech.org), and a member of the Duke Moral AI research group, on behalf of which she led a presentation at We Robot on the group’s work on algorithms and kidney exchange policies (www.whogetsthekidney.com). At NYU, Cassi is a member of the Privacy Research Group and co-founder and President of Rights over Tech, a new student group. Cassi spent this past summer as a Privacy, Data, and Security fellow at Perkins Coie in Seattle, including a two-week externship with Intel in the Bay Area.

Cole Rabinowitz is a 2L from the Seattle area interested in cybersecurity law as it operates in the context of national security and investigations. He is the Vice President of the National Security Law Society, a student organization that hosts monthly lunch discussions and larger events with experts in different areas of national security law. Prior to law school, Cole worked as a Litigation Paralegal at Paul, Weiss in New York City where he assisted on a variety of government investigations and multiple trials representing technology companies. After Paul, Weiss, Cole joined the Boston Consulting Group as an Associate Researcher in the Technology and Public Sector practice areas where his work focused on innovative ways governments can use technology, including smart cities, open data portals and other digital government services. In Summer 2018, Cole interned with the U.S. Attorney’s Office for the Eastern District of New York, where he worked in the criminal division on cybercrime, narcotics, money laundering, and securities fraud cases. Cole graduated magna cum laude and Phi Beta Kappa from Boston College in 2014 with a B.A. in International Politics.

Thank You!
Your message has been sent successfully.